Tattoos are the art and design craved in the human body. For millennia, tattoos have captivated people of all nations and all classes. Tattoos have been used to enhance beauty, demonstrate individuality, express belonging, and sometimes to identify, shame, or punish people since the ancient Egyptian, Greek, and Roman societies. Some tattoos represent some kind of meaning (like a family crest, crime, sins), some hold emotional attachment. Among the young and middle-aged generations, it is regarded as a fashion.

Unfortunately, tattoo removal is more expensive and time-consuming than getting one.

Tattoos are made by injecting exogenous pigment in to the dermal skin layer, and they can be done intentionally or as a result of trauma and accidents. Professional, amateur, cosmetic, traumatic, and medical tattoos are all types of tattoos. Professional tattoos are permanent in nature and are put with a tattoo machine into the deeper layer of the dermis. They generally require repeated treatments to remove.

Amateur tattoos are typically smaller, lighter in color, and placed with handheld needles or homemade machinery, making them easier to remove. Cosmetic tattoos, often known as permanent cosmetics, are becoming increasingly fashionable. Micro-pigmentation is often used to apply permanent eyeliners, eyebrows, and lip liners to save time and improve facial characteristics. However, many of the inks used contain red, brown, white, or flesh-colored pigments, and inks containing titanium dioxide and iron oxide are difficult to remove.

Traumatic tattoos are deposited in the skin following abrasion, laceration, or explosive injuries. Depending on the depth of the pigment, such forced penetration of dark particles into the deep dermis results in black or blue tattoos. Tattoos have also been utilized in medicine, including corneal tattooing, radiation field marking, and medical alert tattoos, which use tattoos etched into the skin instead of medical alert jewelry to inform medical staff during an emergency.

Historically, destructive procedures such as dermabrasion (sanding smoothing the skin upper layer), salabrasion (scrubbing the skin with salt), cryosurgery (using intense cold to remove the tissue), electrosurgery (the use of electricity to produce tissue thermal damage through dehydration or vaporization), and surgical excision (surgical removal of skin along with healthy skin tissue) were used to remove unwanted tattoos. Incomplete removal and varying degrees of scarring and dyspigmentation are common outcomes of non-selective destructive methods.

The use of multiple wavelengths to target different-colored pigments with relative ease and fewer difficulties than before has revolutionized tattoo removal thanks to advances in laser and light-based technology.

The most common method of tattoo removal is to use lasers to break down the ink particles in the tattoo into smaller particles. Dermal macrophages are immune cells responsible for collecting and digesting cellular waste. When it comes to tattoo pigments, macrophages accumulate them but have a hard time breaking them down. They keep the ink pigments instead. When a macrophage is wounded, it releases its captive ink, which other macrophages take up. This can make tattoo removal more challenging. Macrophages can more easily remove ink particles when treatments break them down into tiny fragments.

The light absorption spectra of tattoo pigments are unique. To deliver effective treatment, a tattoo laser must be able to emit enough energy within the pigment’s absorption range. Because their absorption spectra fall outside or on the edge of the emission spectra available in the tattoo removal laser, certain tattoo colors, such as yellows and fluorescent inks, are more difficult to remove than darker blacks and blues. Titanium dioxide, which is extremely reflective, is found in high amounts in recent pastel-colored inks.

As a result, because they reflect a considerable amount of incident light energy away from the skin, such inks are difficult to remove.

The number of sessions required for laser tattoo removal is determined by a variety of factors, including the body area treated, skin tone, ink color, scarring, and the amount of ink present. The immune system’s effectiveness could also be a factor. On average at least 7 – 10 treatments are often needed.

In addition to determining a reasonable number of treatment sessions, patients should be informed about the potential side effects of tattoo removal. Patients should be informed that tattoo cleaning is frequently incomplete, and they may see a lingering tattoo outline and textural alterations. Patients with darker complexions are more likely to develop problems. Textural alterations in the skin are not uncommon after many laser treatments. All patients should be reminded to use strict sun protection measures. Melanin in the epidermis can compete with laser light meant for tattoo removal for absorption. Dyspigmentation, blistering, and scarring can result from the death of melanin-containing cells.

2. The ink is removed by your body, not by the laser.

Although Q-switched laser tattoo removal has revolutionized the tattoo removal industry, the laser does not erase the tattoo color from your skin. Short bursts of energy at certain wavelengths are emitted by Q-switched lasers, a technique is known as “selective photothermolysis.” Only the tattoo pigments are targeted by these energy pulses, which break them down into small particles. Then your lymphatic system absorbs and removes the particles. The removal is done by your lymphatic system, not the laser.

3. Those Frost-Like Patches are caused by steam escaping from your skin.

You may observe areas of white, frost-like patches around the tattoo surface just after laser tattoo removal. They may appear amusing, but they are harmless and only last for a short time. The steam created by the laser’s heat swiftly fleeing from your skin causes these “icy” spots.

4. Your skin will not be burned by the laser.

The pigment particles must be heated to thousands of degrees Fahrenheit before they can break up into tiny fragments. The skin around your tattoo isn’t affected because the heat is just directed at the pigment. Because the heat only remains on the particles for a fraction of a second, the energy goes through your body without harming you.

Myths about the laser tattoo removal

1. Using a Tattoo Removal Cream Will Remove the Tattoo

To begin, realize that no topical cream will completely remove your tattoo. Sure, it may help fade the ink, but your tattoo will most likely remain visible even after using the cream for a long time. The most effective treatment is laser tattoo removal, which not only fades the ink but also removes the ink pigment from your skin.

2. Tattoos that are “new” are quite impossible to remove.

What if you got a tattoo recently and are already regretting it? Are you doomed to bear it till it fades away on its own? Not in the least. Even a brand-new tattoo can be removed using laser tattoo removal. It’s never too soon to start laser removal treatments after the skin has fully healed (including any scabbing). Older tattoos, on the other hand, are frequently easier to erase since they have faded over time.

3. It’s too painful to remove a tattoo with a laser.

People are often scared to have laser tattoo removal because they believe the procedures will be more painful than tattooing. This isn’t always the case, however. While some discomfort is experienced during laser treatment, it is very temporary.

4. There Will Be a Scar After Laser Tattoo Removal.

Some people are hesitant to undergo laser tattoo removal because they believe it would leave a scar. There is no cause for your skin to scar after laser tattoo removal if you follow the instructions carefully. If the specialist administering your treatment gives the skin enough time to heal before performing any follow-up treatments, the chances of noticeable scarring are minimal. 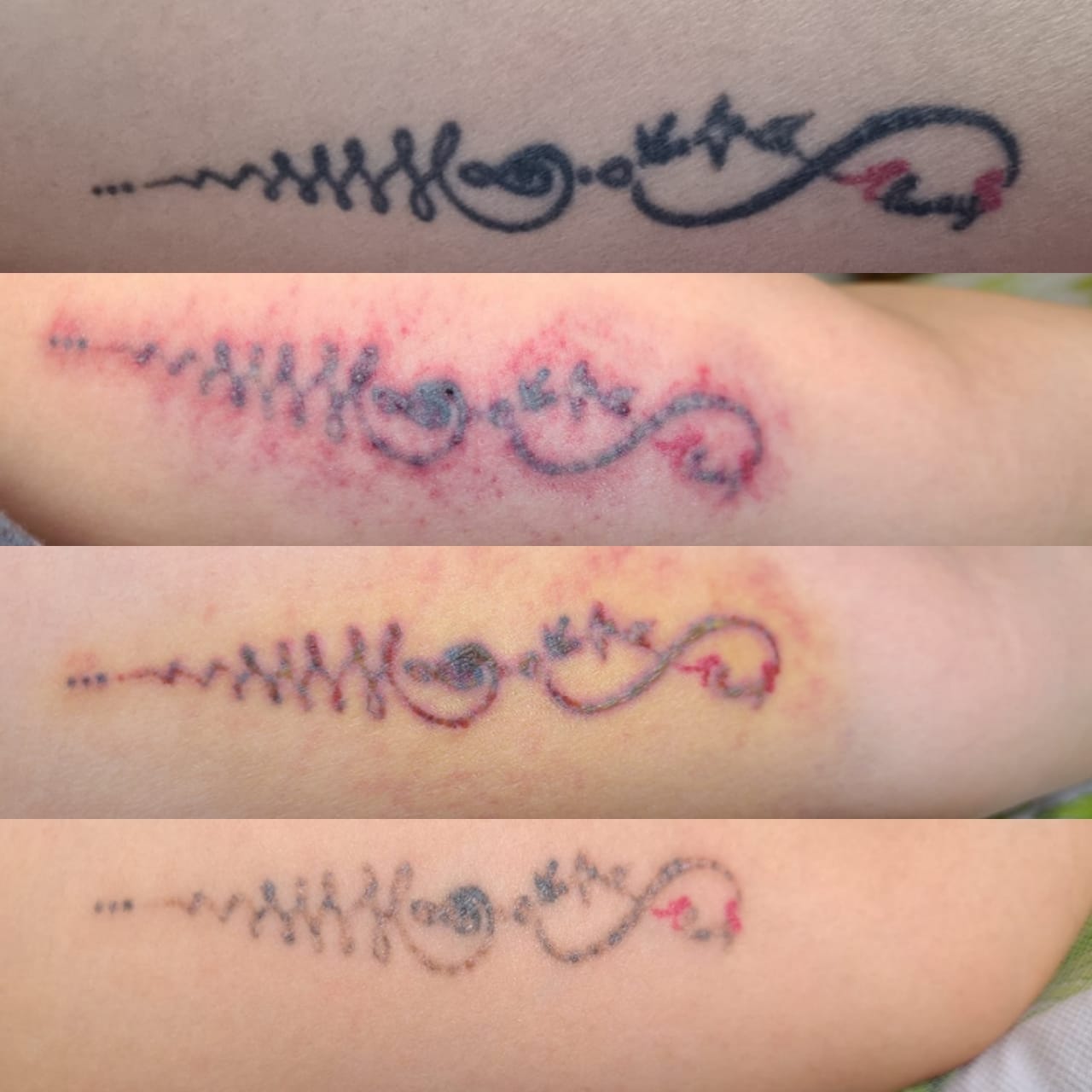